I'm happy to say that I'm writing this from my newly assembled and configured workbench. 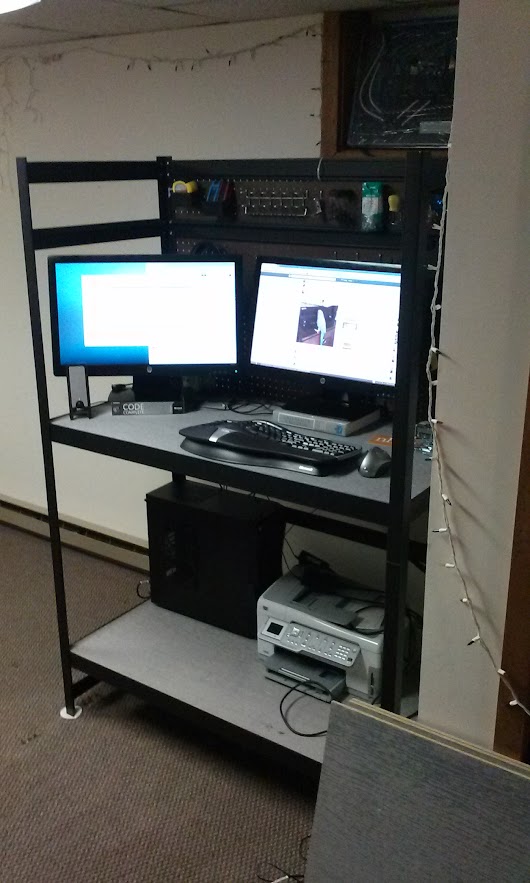 There are still additions and modifications to make, but so far I'm quite happy with the net result. I'd like to share a bit about how I got into this idea of a workbench and how to attempt this yourself.

Considerations for the desk

For lack-of a better term, I'll call this project semi-DIY. Really it was a matter of determining what I needed, finding components that were easy to work with to a decent result, and going for it.

When you begin your quest for a new standing desk, the first (and possibly off-putting) results you'll see are things like the Uplift 900 Electric Sit/Stand Desk. At a cool $700 base price, it may make a person who shops Savers put off. I decided that I'd like to see what else I could do before I put down that much money on one of these desks (though I was willing to).

When putting my ideas together for a workbench, I had a few things I was hoping to get out of it:

And of course, it should look at least semi-decent. I'm not fancy by any means, but it is nice if it doesn't look horrendous.

It finally hit me - I had seen this before. Using storage racks as a table! This was something a prior job had done to configure their servers. And with some tweaks and changes, it could act as a perfectly good desk.

After some searching around, and a few visits to local hardware stores, I landed on this rack. 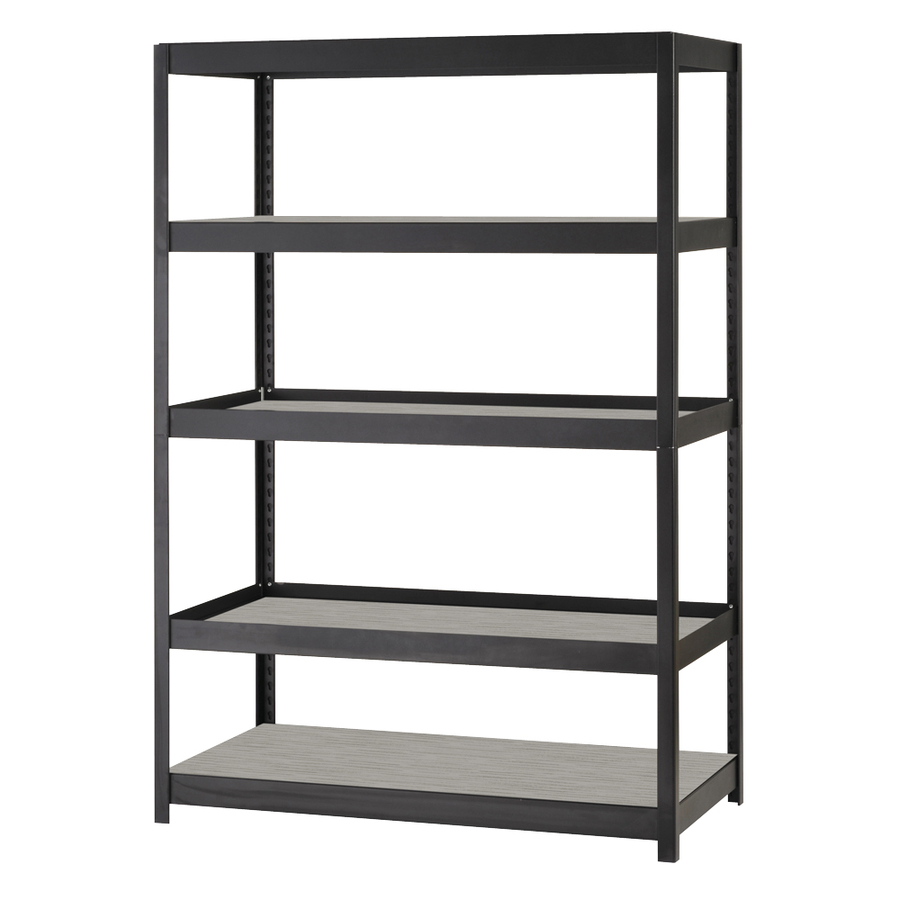 This had the right combination of size, cost, and ease of assembly. It also happened to have a decent appearance by covering the mounting holes for the side bars.

There are a few tools I'd recommend for putting the shelving: 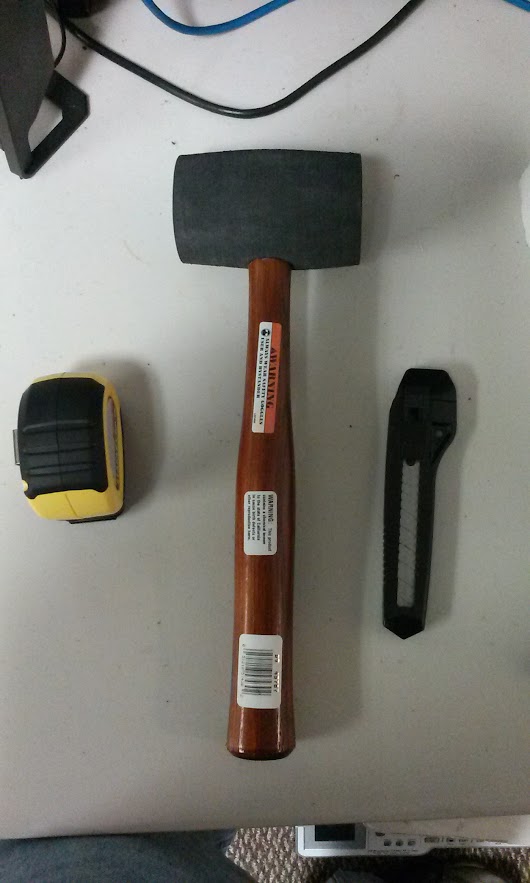 When putting this together, I was quickly reminded how a decent design works by being very simple for the small pieces, and having the ability to combine into more complex pieces. First, you'll start by putting together one side of the rack. 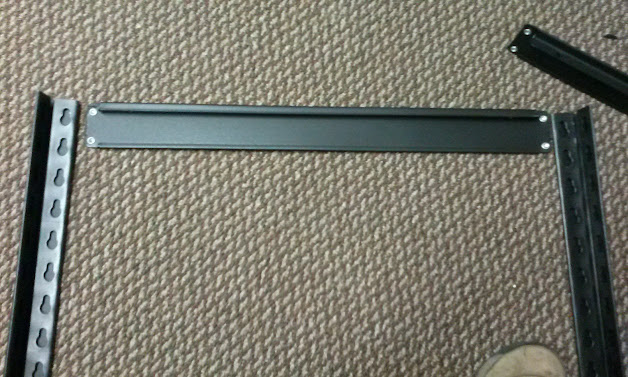 You'll place the silver metal attachments into the larger portion of the connection point. Then you'll take a rubber mallet and push the bar into the smaller slot. The net result looks something like this: 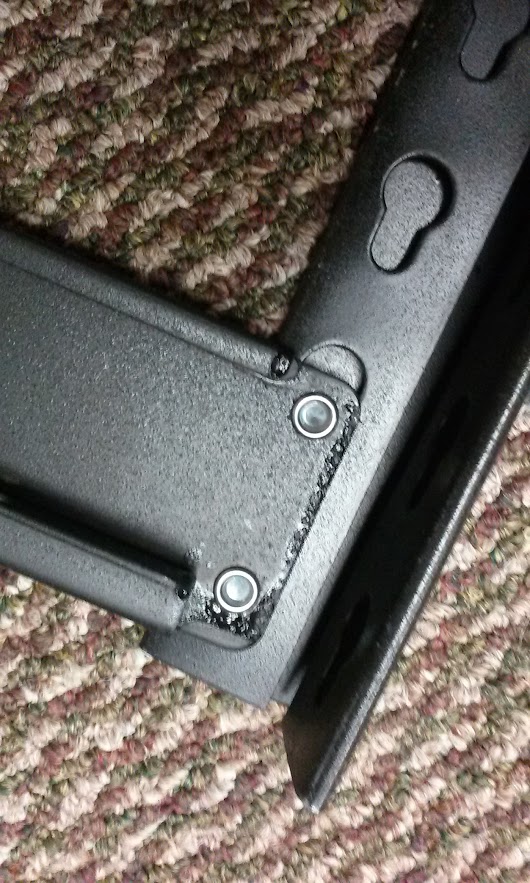 You'll also want to note exactly whether the lip for the wood is higher or lower. This needs to be the same on all four sides to ensure the board lays flat. It can go either toward the ground or toward the sky, but it must be the same for a given shelf on the rack.

You'll repeat this on all four sides of the rectangle to create the base of the shelving. 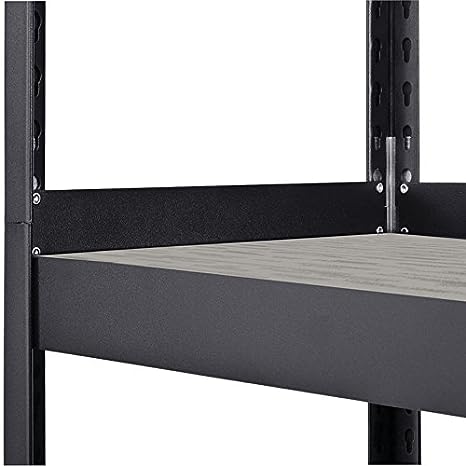 I have no idea how you do this without a rubber mallet, which is why I consider it super critical.

Finally, as your finish and touch up your assembly, make sure to measure where your primary tabletop is in relation to your stance. Your arms should form roughly a right angle when in typing position over your tabletop. Depending on the size of your keyboard, this should be placed about 1/2'-1' lower than your hands (1-2 notches in our rack).

Once this is finished, and you've dropped in some of the wood, you should be roughly at this point in the assembly:

I modified my desk from this setup by lowering the 2nd shelf closer to the ground. This gives my feet a place to seat them when I do decide to sit. At this point in the assembly it's actually relatively easily to move shelves up and down. The structure is solid enough that moving a single shelf at a time won't make this fall apart.

After this, I then decided to add a pegboard to the back of the desk. This allows me to do a few things:

Currently, the peg board is connected to the frame using zip ties. This appears to be perfectly well suited for the tools I have so far. In the future though, it may be nice to tidy this up by using holes on the lip of the frame bars instead.

I also purchased a set of hooks and other containers to hang on the peg board. 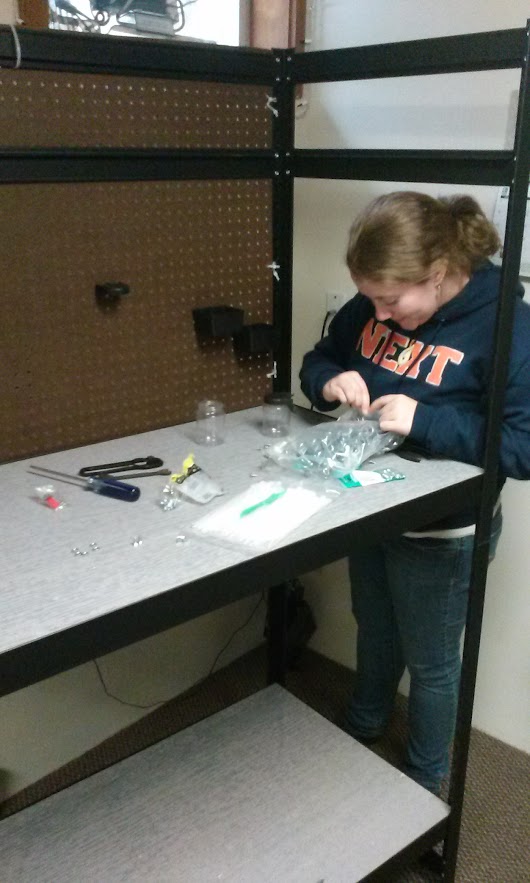 After all this, it was just a matter of hanging tools, plugging in some equipment, and starting things up.

So far, the cost of this project is as follows:

There are a few other things I didn't include in the cost table that I already had (zip ties) or that I didn't use (nuts & bolts). These would be a minor adjustment to the total cost anyway.

This also doesn't include some new accessories that I will be getting (monitor arms, new stool). These costs WILL make a big difference in the overall cost. I will include these in a 2nd part perhaps.

Overall though, roughly $150-$200. This is a huge savings when compared to the roughly $700+ one might spend on a standing desk.

Overall, I'm really happy with how this has turned out so far. There are things still to be done (see TODO later on). As always though, there are things I may have done differently or didn't like.

There is still plenty of things left to do. Those things include:

If and when I decide to write part two, it will include an updated cost table along with details of cleaning up the setup and improving it slightly. I'll also include some more photos.